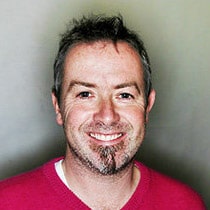 Andy Hughes grew up in Yorkshire, the nearest beach was quite a distance. Later in life as an art student in Cardiff he learned to surf. An early and active member of Surfers Against Sewage he spent a summer in Porthtowan before moving permanently to Cornwall initially as as the first artist in residence at the Tate Gallery St Ives. For over twenty years he has supported Surfers Against Sewage in many ways, significantly by providing images for various campaigns as well as indirectly through his main art practice.

This summer he was invited to visit remote beaches in Alaska as part of an Expedition and Exhibition (titled: GYRE ) with Plastic Waste as Material and Message. This project brings together world leading scientists and artists, the exhibition and film will join global voices campaigning for an end to the littering of the oceans. Andy is pleased to support Surfers Against Sewage and continues to support their work nationally and internationally.