Send a Message In A Bottle to Parliament

As part of the Message In a Bottle campaign, Surfers Against Sewage is urging the public to write to their MPs calling on them to support a deposit return system (DRS) in the UK. Each day the UK uses a shocking 38.5 million plastic bottles and 59 million cans, of which only 56% are recycled. Introducing a deposit system will help ensure these containers are trapped in the recycling economy rather than escaping to pollute our precious blue and green environments.

This Message In A Bottle action calls on supporters to write and post a letter calling on their elected representatives in Westminster and the devolved parliaments to pilot and support the introduction of a nationwide deposit system in the UK. Traditional letters are still one of the most effective ways to influence politicians and create positive change.

Download SAS’s helpful guides on how to write an impactful letter here:

Working alongside co-leader of the Green Party, Caroline Lucas MP, Surfers Against Sewage has launched an Early Day Motion: 656 – Bottle Deposit Return Scheme – and directing MPs to support the motion so that this important issue can be debated in the Houses of Parliament and included in the government’s  imminent National Litter Strategy.

The Early Day Motion text is as follows:

That this House notes that a staggering 38.5 million plastic bottles are used every day in the UK and that, along with cans, plastic bottles account for approximately 40 percent, by volume, of all litter found in our environment; believes that a Deposit Return System will help ensure that these bottles and cans stay in the recycling economy rather than polluting our environment; further notes that Deposit Return Systems were commonplace in the UK until the 1980s, and are successfully used in 11 other European countries with recycling rates often in excess of 90 percent; welcomes the success of the five pence single-use carrier bag charge in England, which has reduced the distribution of plastic bags by 6 billion bags in its first six months; believes that a Deposit Return Scheme would help to dramatically increase the collection rate of plastic bottles and other containers, helping to protect the environment and to save local authorities and taxpayers money; and calls on the Government to follow the example of other nations and introduce a mandatory Deposit Return Scheme in the UK by including it in the National Litter Strategy.

Surfers Against Sewage supporters have already sent hundreds of letters to MPs calling for their support for a deposit return system. 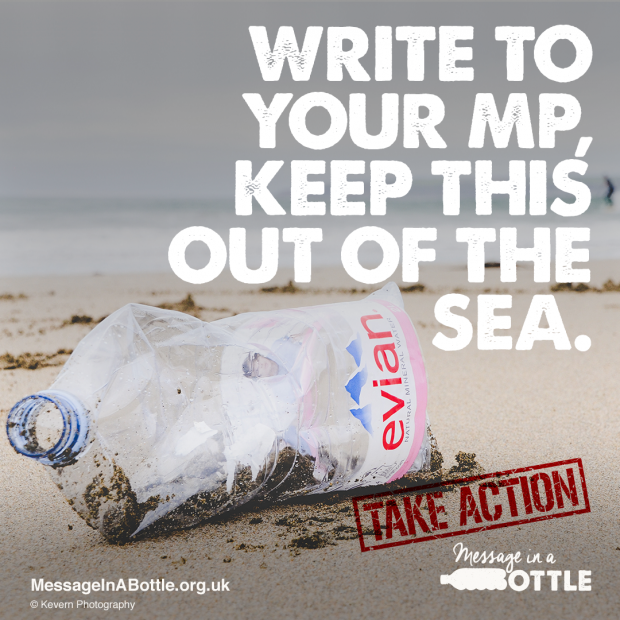 Twelve million tons of plastics are dumped into the sea every year and these plastics will take hundreds of years to break down, eventually fragmenting into microplastics.  Bold actions to protect our marine environment from increasing levels of plastic pollution are urgently needed.  A Deposit Return System is the most effective and easy to implement solution we have to fight this marine litter crisis and targets the worst offender, single use plastics. These containers might be used for a few minutes but can impact the environment over many centuries.  SAS beach cleans have removed and recycled a staggering 50,000 plastic bottles from UK beaches over the past 12 months.

After writing to your MP and/or elected official in your devolved nation please complete this short form so that the responses from MPs can be recorded.

In the UK, we use an estimated 38.5 million plastic bottles every day, yet shockingly, we fail to recycle almost half of these. That’s over 16 million going to landfill or polluting our cities, coastline, and countryside daily. We need commonsense and effective ways to help deliver a more sustainable economy. One such is approach is deposit return systems – these could significantly increase reuse and recycling rates, and reduce litter and plastic pollution in our environment. Please support Surfers Against Sewage’s Message In A Bottle campaign and write to your MP calling for a deposit return system for the UK as part of the National Litter Strategy.
Caroline Lucas MP, Leader of the Green Party

Fighting plastic pollution in our oceans has rapidly become Surfers Against Sewage’s priority issue. Our beaches are awash with single use plastic bottles and we desperately need new systems to reuse, recycle and up-cycle them more effectively. Deposit return systems are a proven way of capturing up to 90% of plastic bottles and containers, and would offer the UK a huge step forward in stopping plastic pollution. Please ask your MP to support our call today.
Hugo Tagholm of Surfers Against Sewage