Kurt Jackson has partnered with Surfers Against Sewage to highlight our work to protect the UK’s oceans, waves and beaches for the launch show of his gallery The Jackson Foundation.

The show consists of a series of paintings, sculpture and ceramics created by Kurt Jackson, a new body of work inspired by the last few years following his surf-obsessed studio assistant, George Kemp.

Kurt Jackson’s work has always explored the connection between our environment and us; how we see, feel about and treat the world around us. We may live, work or even just play in the landscape but this link, this way of fitting in and using the world out there, gives us a connection – it molds us and changes us and sometimes in turn may change that world.

“Often it’s argued that the surfers path is a spiritual one – this connection between the individual and the wave, the ocean hosting its rider – but what is certain is that it opens the eyes of that person to the natural world, to an extraordinarily beautiful and powerful side of nature that needs respect and admiration and in the long run our protection and conservation.” – Kurt Jackson

The Jackson Foundation is a brand new gallery space created by Kurt and Caroline Jackson, based in a large ex-industrial building in the centre of St Just in Penwith, West Cornwall.

The gallery is essentially an environmentally informed arts space – a unique Cornish foundation that consists of a large dynamic exhibition space, working with national and locally based NGOs and charities in the environmental sector – all sustained and supported by the work of Kurt Jackson.

With a desire to invest in the future potential of this part of the world and put their ‘politics’ into action Kurt and Caroline Jackson have built a green build/conversion using renewables and sensitive local materials and local labour.

The Foundation will be supported by the on-going working practice of Jackson collaborating with environmental organisations and those groups interested in the natural world as well as parts of the educational establishment. The commercial element to some of the exhibition programming will feed into and sustain the Foundation, its aims and survival.

Kurt Jackson’s work has a national and international following and by placing the Gallery in St Just a new link in the Art Loop will be created in Penwith: St Ives, St Just, Newlyn and Penzance – a trail of art and heritage attractions. 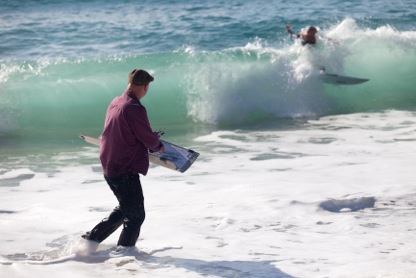