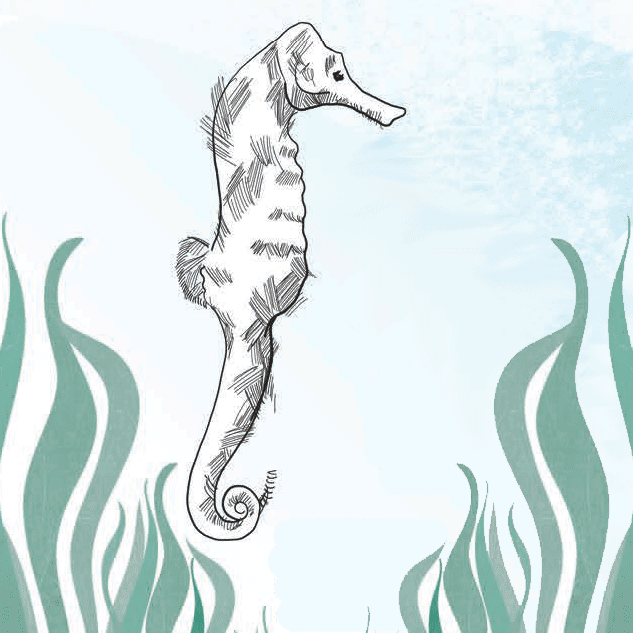 We often think exciting species only exist in exotic, distant locations. But you’d be amazed at the array of species living on our coastal doorstep – from dolphins, whales and sharks to seahorses, corals and solar-powered sea slugs!

These species are vital to the ecosystem – controlling populations and helping to create habitats where other species can thrive. However, activities such as damaging fishing practices, plastic pollution and climate change are threatening our native coastal wildlife.

By helping to create a network of Marine Protected Areas (MPAs) around the UK, SAS is tackling the issue. But there’s more to be done. Reducing carbon emissions, avoiding single-use plastics and eating less fish are all positive steps towards protecting our seas and the magnificent species they support.

This article was first published in our exclusive supporter magazine Pipeline. If you enjoy it, why not become an Surfers Against Sewage member today? You’ll receive three issues of Pipeline magazine over the next year… while helping protect our oceans and waterways at a crucial time. 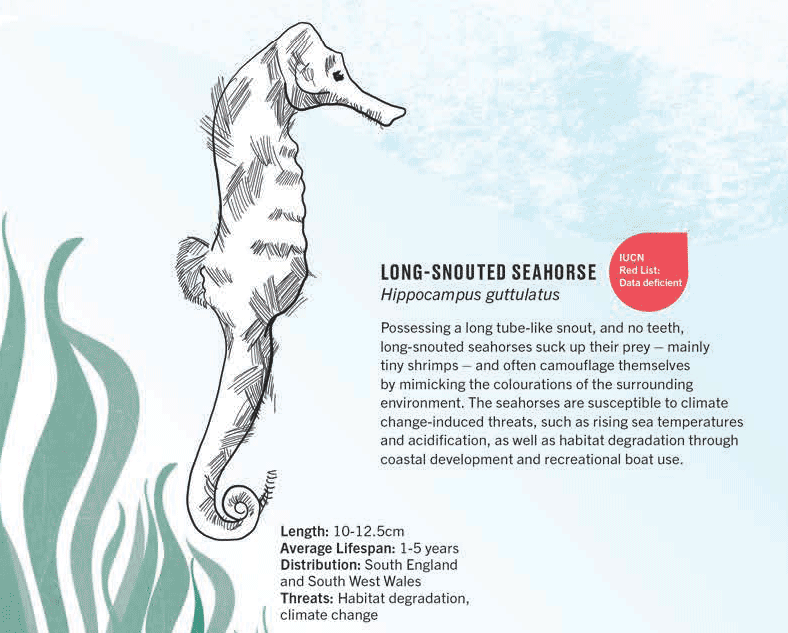 Possessing a long tube-like snout, and no teeth, long-snouted seahorses suck up their prey – mainly  tiny shrimps – and often camouflage themselves by mimicking the colourations of the surrounding environment. 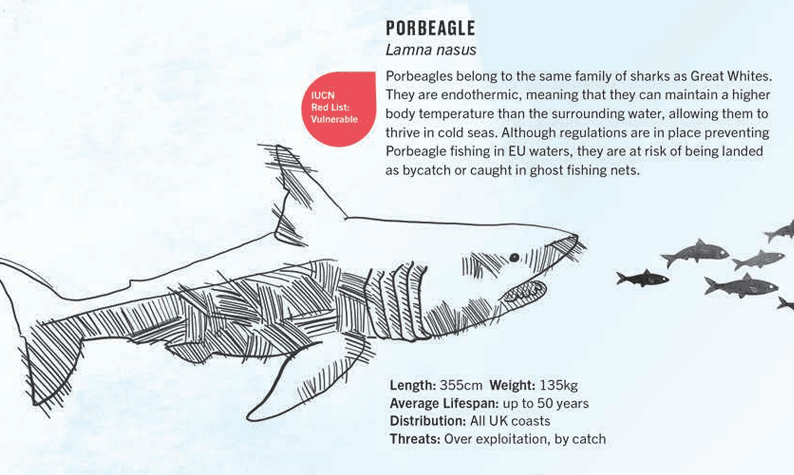 Porbeagles belong to the same family of sharks as Great Whites. They are endothermic, meaning they can maintain a higher body temperature than the surrounding water, allowing them to thrive in cold seas.

Threats: Although regulations are in place preventing porbeagle fishing in EU waters, they are at risk of being landed as bycatch or caught in ghost fishing nets. 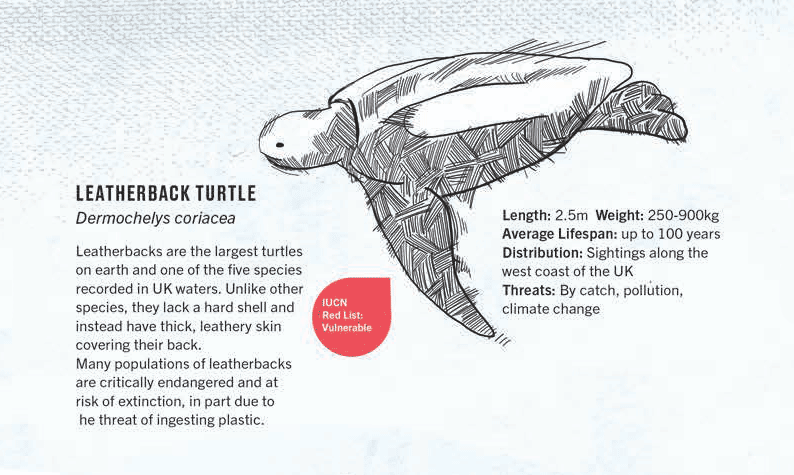 Leatherbacks are the largest turtles on earth and one of the five species recorded in UK waters. Unlike other species, they lack a hard shell and instead have thick, leathery skin covering their backs.

Threats: Many leatherback turtle populations are critically endangered and at risk of extinction, in part due to the threat of ingesting plastic. Other threats: being caught as by-catch, and climate change. 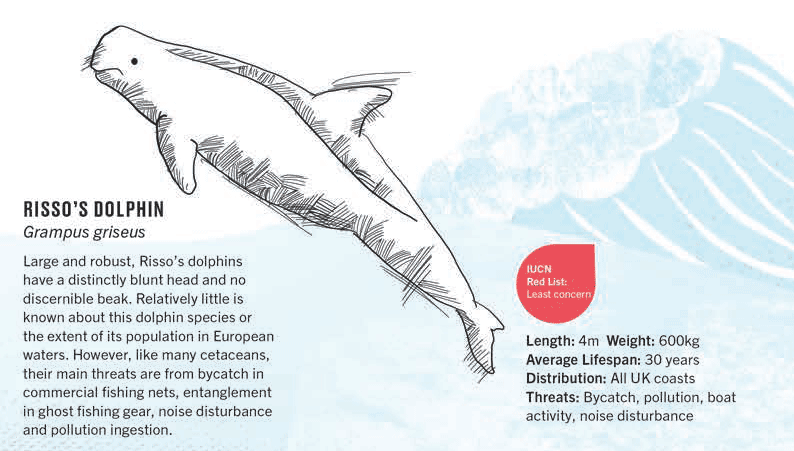 Large and robust, Risso’s dolphins have a distinctly blunt head and no discernible beak. Relatively little is known about this dolphin species or the extent of its population in European waters.

Threats: Their main threats are from by-catch in commercial fishing gear, entanglement in ghost fishing gear, noise disturbance and ingesting pollution like plastic. 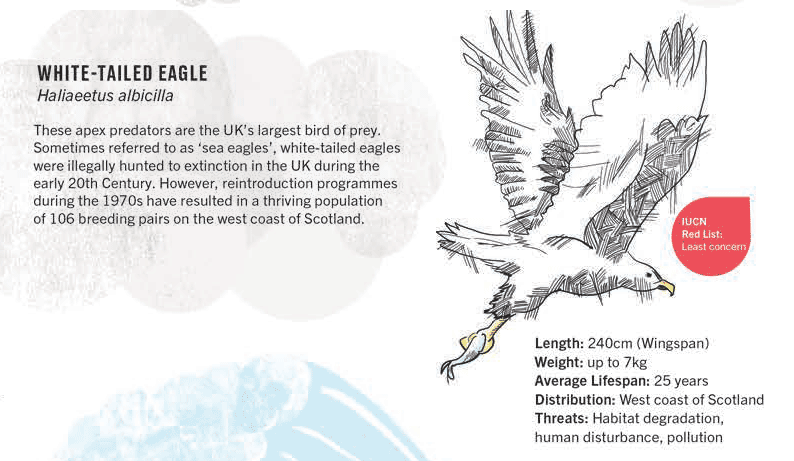 These apex predators are the UK’s largest bird of prey. Sometimes referred to as ‘sea eagles’, white-tailed eagles were illegally hunted to extinction in the UK during the early 20th century. However, reintroduction programmes during the 1970s have resulted in a thriving population of 106 breeding pairs on the west coast of Scotland. 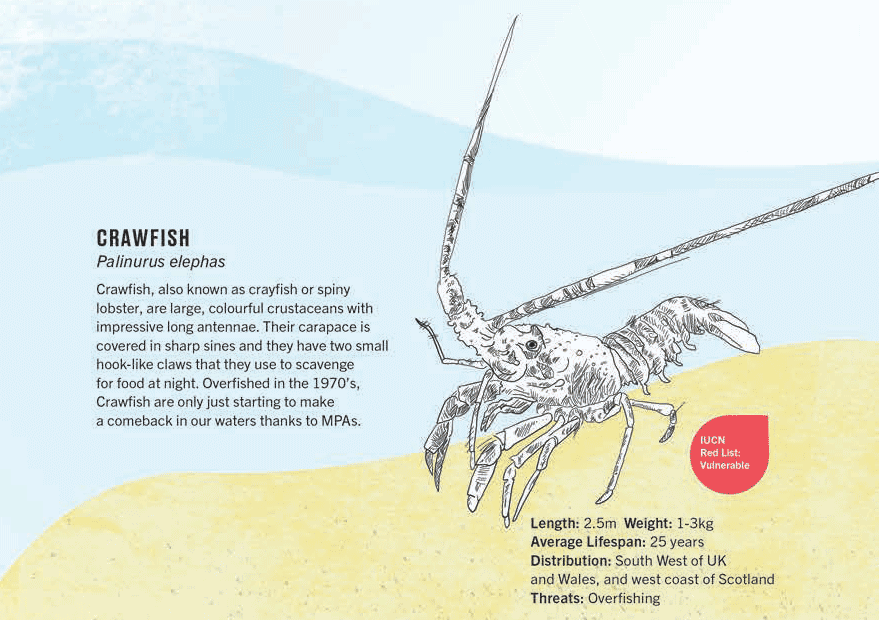 Crawfish, also known as crayfish or spiny lobster, are large, colourful crustaceans with impressive long antennae. Their carapace is covered in sharp spines and they have two small hook-like claws that they use to scavenge for food at night. Overfished in the 1970s, crawfish are only just starting to make a comeback in our waters thanks to Marine Protected Areas. 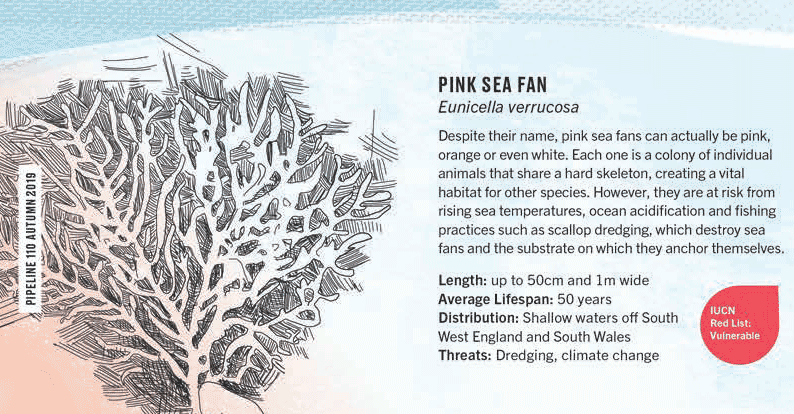 Despite their name, pink sea fans can actually be pink, orange or even white. Each one is a colony of individual animals that share a hard skeleton, creating a vital habitat for other species.

Threats: At risk from rising sea temperatures, ocean acidification and fishing practices such as scallop dredging, which destroy sea fans and the substrate on which they anchor themselves.

One of four native species of wrasse, cuckoo wrasse and these most colourful, with males sporting electric blue markings. Interestingly, all cuckoo wrasse are born female and senior females change to males when there is a need.

Threats: The greatest threat to the species is habitat degradation, most notably through eutrophication and destruction fishing practices.

This illustrated article was first published in our exclusive supporter magazine Pipeline. If you enjoyed, why not become an Surfers Against Sewage member today?

You’ll receive three issues of our ocean lover’s magazine – Pipeline – over the next year, as well as a 10% discount in our eco-goods store… while helping protect our oceans and waterways at a crucial time. Together we’re taking urgent action on threats like plastic pollution, sewage and the climate crisis to help protect our oceans and precious sea life. Join us now.