New research has revealed how products from just a handful of companies account for more than half of packaging pollution found on UK beaches – with Coca Cola and PepsiCo named the worst offenders.

The figures, unveiled by ocean conservation charity Surfers Against Sewage, have been submitted to government as campaigners call for transparency from the UK’s ‘biggest polluters’.

We’ve sent this data to the government, now demand it acts on plastic pollution. Sign the #GenerationSea petition: Click Here

It follows the UK’s largest ever nation-wide survey of packaging pollution found on Britain’s beaches and rivers, conducted by more than 45,000 volunteers during SAS’s recent Big Spring Beach Clean series.

And, with the results now publicly released, it has been exposed that the vast majority of UK waste found strewn across the coastline is the responsibility of just a handful of companies.

During the 229 cleans in April, 49,413 pieces of pollution were picked up, of which 20,045 were branded, with Coca Cola producing the largest proportion of branded items (15.5%), PepsiCo, which owns Walkers, made 10.3 per cent, followed by Mondelez International, which owns Cadbury, at 6.8 per cent and Nestle 5.5%.

‘Our survey clearly shows that big business is responsible for the scourge of plastic and packaging pollution.

Just ten companies were responsible for over half of the packaging pollution recorded. Unsurprisingly, the high street brands had headline appearances with Coca Cola, PepsiCo, Nestle and McDonald’s all gracing the top ten.

These companies must invest more in the redesign of packaging, alternative ways of product delivery and ramping up packaging re-use to truly turn the tide on the plastic pollution that is sweeping our world.”

The research has been submitted to the UK government as evidence in the consultation underway on plastic packaging and Extended Producer Responsibility (EPR) in a bid to make producers (parent companies) take more responsibility for the costs of dealing with their packaging once it has been discarded.

Under the present EPR guidelines, producers ‘that handle over 50 tonnes of packaging annually and have an annual turnover over £2 million’ should be accountable for the cost and system for dealing with the packaging they create and sell.

But, currently, parent companies do not share information on the packaging they produce, hiding the scale of their damage to the environment – and paying less than 10% of the costs of dealing with it. The result is that the cost of this waste is then left in the hands of local councils, tax payers and, finally, the environment.

Each parent company has a specific brand that accounts for between 75% and 100% of its total share of branded items found on beaches and rivers.

And it turns out that every company in the top 50 polluters list – responsible for 91.6% of the branded items – has an annual turnover far greater than the £2 million threshold.

Now, SAS is urging the Government to put in place stricter rulings, saying it is critical that new EPR regulations ensure transparency in the amount of all producers packaging in order to fully hold the to account for the pollution they create. 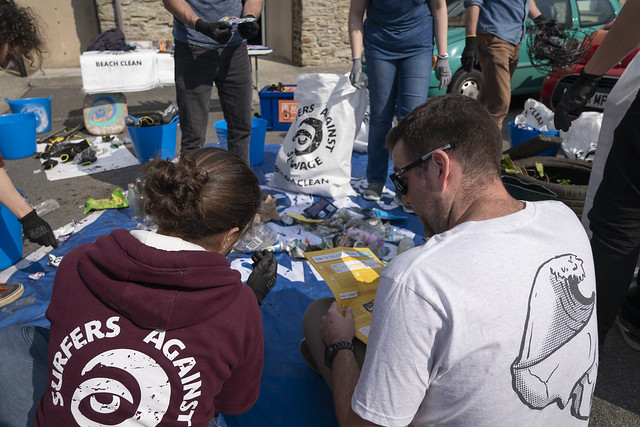 A total of 49,413 items were recorded at 229 cleans across the UK. Photo: Richie Graham

“Producers must offer full transparency and disclosure on the amount and type of packaging they use in order that new extended producer regulation can be truly effective. Our environment is in peril and plastic pollution is a clear indicator that business as usual just won’t do.

“This is not a littering issue – business needs to provide radical and responsible new systems that drastically reduce their impact on our oceans, forests and nature at large.

“People and planet need these companies to change how they do business. At the moment, the cost of this waste is left in the hands of local councils, tax payers and, finally, the environment.

The analysis of the information collected was undertaken by independent environmental consultancy Eunomia Research & Consulting.

They found that while the top 50 companies are predominantly food and beverage manufacturers, a number of tobacco companies and companies with a wider brand portfolio – such as Unilever – also fall within the top 50.

We’ve sent this data to the government, now demand it acts on plastic pollution. Sign the #GenerationSea petition: Click Here

The analysis showed the top five parent companies tended to be made up of a small number of major polluting brands including Walkers, Cadbury, McDonalds, Coca Cola, Nestle, Pepsi and Costa Coffee.

Of the 799 brands reported, 496 had only one or two pieces of litter associated with them and were disregarded in further analysis, due to only constituting 3% of the total items. The remaining 303 brands can be mapped to a total of 171 parent companies, with the top 50 companies are responsible for 92% of the branded packaging pollution.

The remaining unbranded items collected included things like cotton buds, cigarette butts and bottle caps, as well as sweet wrappers and baby wipes – no less important, but harder to track.

The charity now hopes that this latest study will push the UK Government into making the right decision for the future of the beaches and oceans for generations to come – while also sending an important message to the companies responsible for the pollution.

To support SAS and its #GenerationSea campaign, a petition calling on Government to take stronger action against things like plastic pollution and climate change under the new Environmental Bill, click here.

Article by Hazel Murray on behalf of Surfers Against Sewage