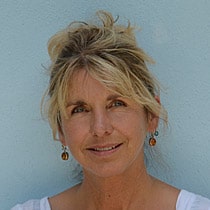 Lesley has had a varied career, including screen printer, knitwear designer, ghostwriter and seaside landlady. In the 1970s she worked at legendary music club Eric’s in Liverpool before moving to Australia in 1981.

The following year living on Manly’s Ocean Beach, her 10 month-old daughter Amie (who later worked for SAS), contracted gastro-enteritis from airborne spray polluted by raw sewage from the nearby North Head outfall. In a critical condition, Amie was rushed to hospital and took many months to fully recover.

Returning to Cornwall in 1984, Lesley nursed various members of her family through repeated ear infections and stomach bugs caused by raw sewage washing onto the beaches around St Agnes.

In the early days of SAS, Lesley was Honorary Treasurer, becoming a non-executive director when the first board was formed in 1993.

She and her three elder children took part in the first lobby of the Houses of Parliament in 1991 where her sons, Jimmy and Harry then aged 6 and 4, joined the demo in wetsuits carrying their boards.