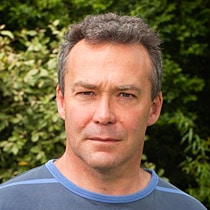 Alex is the author of Surf Nation: In Search of the Fast Lefts and Hollow Rights of Britain and Ireland (2007), a ground-breaking literary odyssey around the UK and Irish surf scene, as well as Amazing Surfing Stories (2012), a collection of stories about surfing of which The Times Literary Supplement said: Accessible and diverting. There are a great many stories here, all short and true. The language is at once literary and idiomatic…Wade comes across as so steeped in respect for the ocean that the overriding impression is of authenticity. The book succeeds through a confluence of subject matter and structure… the feeling is eerily akin to that of surfing itself. He is also the author of Wrecking Machine: A Tale of Real Fights and White Collars (2005), and a novel, Flack’s Last Shift (2016).

Joining SAS as a trustee in 2007, Alex became Chairman in 2020. Alongside writing books, Alex works as a freelance journalist for the UK broadsheets and as a libel lawyer for specialist content advice law firm Reviewed and Cleared.

Alex lives in west Cornwall. He admits that a lifetime of surfing, skateboarding, windsurfing, boxing and football have left him with so many injuries that he’s not the force he once was (“if I ever was one – and that’s debatable”…)  but still paddles out when it’s mellow. Or, sometimes, when it’s just impossible not to.