The Times newspaper picks Surfers Against Sewage for Christmas Appeal

The Times newspaper has picked Surfers Against Sewage as one of the beneficiaries of its renowned Christmas Appeal.

In picking SAS the newspaper said:

“This is an organisation that gets results, both on the ground and in the corridors of power. ” 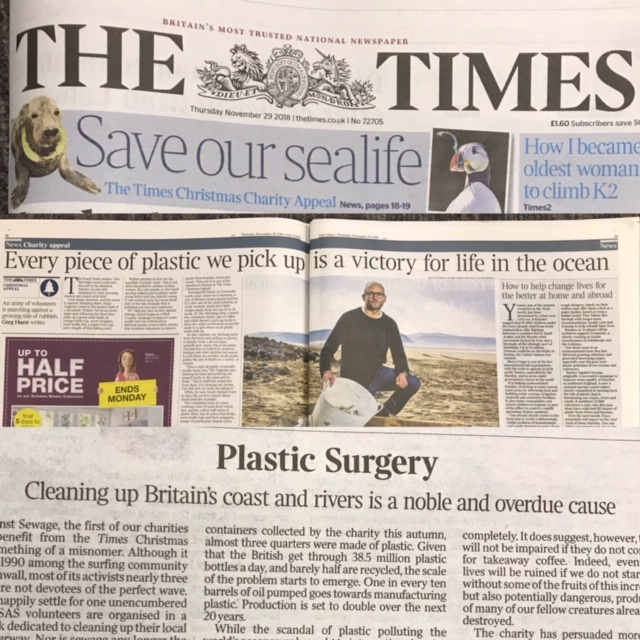 The Appeal highlights the amount of work underway in communities across the UK to tackle single-use plastic and protect our ocean. The newspaper says “SAS has organised more than 1,600 beach and river clean-ups this year. Those clean-ups, utilising 75,000 volunteers nationwide, have resulted in 116 tonnes of plastic waste being removed from the nation’s seashores and riverbanks. Uncollected plastic, in addition to ruining natural landscapes, can poison bird and marine life.”

Hugo Tagholm, CEO of Surfers Against Sewage said “We are thrilled to have been picked by The Times for its Christmas Appeal. We want to say a massive thank you to all the team at The Times and the readers. Its a unique opportunity to share our work all around the UK to protect our oceans and marine life”

The Times talks about the role of SAS in tackling the systems that produce plastic pollution “The charity has persuaded more than 1,000 businesses, 300 schools and 400 communities to work towards making their respective environments free from single-use plastic items. Having been influential in the campaign to persuade supermarkets to start charging for plastic bags, SAS this year lobbied Michael Gove, the environment secretary, over the introduction of a deposit scheme for returned plastic containers. The consultation period for that scheme will start soon.”