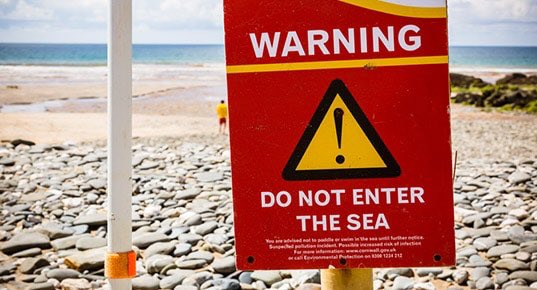 “The #SewageScandal has shown just how much public anger there is about water companies making huge profits whilst dumping vast amounts of sewage into our rivers and ocean. This MUST change – MPs must take strong action tomorrow to #EndSewagePollution“

The pollution of our rivers and coastline is a standard operating process for the water industry and is an issue which Surfers Against Sewage has been fighting against for more than thirty years. Rather than using their sewer overflows in only exceptional or abnormal circumstances, water companies use them abnormally and exceptionally frequently, pumping out over 8,500 hours of sewage pollution into water courses and coastlines daily. That’s 3.1 million hours a year.

Successive governments have failed to act on this highly polluting industry that has consistently placed the interests of its shareholders above the protection of the blue environment. Water companies have given shareholders close to £60 billion over the last three decades – incidentally an amount that would largely solve the sewage crisis – whilst also lining the pockets of their CEOs, who make more in a year than most would in a lifetime. This is money that should be protecting the environment.

We have been campaigning strongly for the Duke of Wellington’s amendment in the Environment Bill, to place a further legal duty on water companies to end the unacceptable levels of sewage pollution they are responsible for. This issue generated huge public attention, which in turn created huge pressure on the Government. After all, why wouldn’t they want to put a legal duty on the water industry to pay for the destruction they are causing?

In response to the public outcry, the Government promised an amendment that would deliver the wishes of the public and be true to the intentions of the Duke’s amendment. The now released wording of this amendment shows that they have been pressured into listening but it simply does not go far enough – and in the little time that has been made available for scrutiny, legal commentators have already highlighted significant loopholes. We cannot accept for our rivers and seas to continue to be treated like an open sewer by water companies.

The sad truth is that water companies have always been required to not pollute like this. The Environment Bill process has just helped bring this issue to light and demonstrate to government just how much public anger there is about the unchecked destruction of the beaches and rivers we all love. We desperately need water companies to finally be held to account for the pollution they cause. We want an end to sewage pollution at our bathing waters and surf spots, and in rivers where people and wildlife should be able to thrive.

So whilst we would far prefer the Duke’s stronger amendment to retain its place in the bill, rather than the Government’s weakened offering, the hard fact is that neither the Duke’s, nor the Government’s, amendment alone is enough – in fact, without proper enforcement, including of existing laws, water companies will keep walking away with huge profits whilst leaving us, quite literally, in the shit.

Since 1991 water companies have failed to treat sewage “effectually” as required by the Water Industry Act 1991 and OFWAT has singularly failed to use the powers granted to them to enforce that duty over the last 30 years. The Environment Agency has also been systematically defunded and disempowered to act. Without regulation and enforcement, any changes on Monday will not yield the scale or pace of change that is demanded or required. It is time for action, not just words.

We know there isn’t an overnight solution, but we want to see ambition, vision and commitment to protect our rivers and beaches from aggressive corporate interests.

MPs should vote with conscience and commitment to protect and restore our waters, the very lifeblood of the country. We have their attention on the issue and we now want to see significant and continual reductions in the frequency sewage is dumped, from an industry that has been given free rein to neglect the environment for far too long.

Until clear action is taken, the campaign continues.