Fragile Coast… On the road with Glyn Macey

Glyn Macey is currently on an epic road trip, painting at 180 stunningly diverse locations around the English Coast to document and capture the environmental and cultural changes found around our coastline.We caught up with him to find out what he’s been up to…..

“Travelling and painting the coast from Plymouth to Poole during February has been an absolute roller coaster of a journey. Storm after storm certainly made my en plein air painting days more of a challenge while the evening demonstration sessions throughout Hampshire, Dorset and Devon were packed to the rafters with environmentalists and artists keen to find out more about the project.

While painting near Torquay I witnessed the aftermath of a cliff collapse, revealing caves tunnelling right underneath the garden of a large hotel which in turn have formed dangerous and unpredictable sink holes. The south Devon coast is a precarious and fragile coast for sure and one that seems unable to cope with the recent Force 8 Sou’Westerlies thrown at it.

Back in Cornwall, a malnourished 60ft Fin Whale became stranded at Nare Point on the Lizard. Local people tried in vain to keep the her alive by dousing the whale with water. Sadly she died a few hours later. 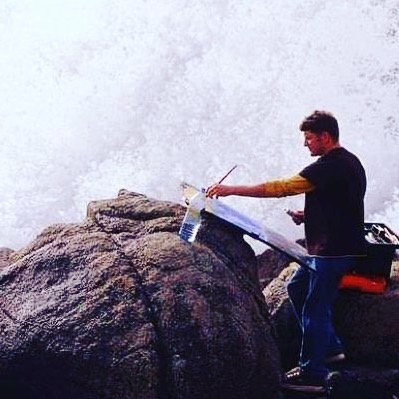 Next up is the Poole to Whitstable leg of the journey. The red sandstone of Devon becomes the white chalk of Sussex and Kent. I’ll be painting at some of the highest sea cliffs in England at Beachy Head and the first of the massive wind farms off the Thames estuary.”

We’re really enjoying following Glyn’s progress around the English Coast and seeing each painting!
To get involved, please visit: glynmaceystudio.com/collections/fragile-coast
Keep up to date with his progress here: facebook.com/glynmaceystudio/

50% of all proceeds from the artwork sold going directly to Surfers Against Sewage.

TwitterFacebook
« UK Communities call for #LessPlasticPlease as Mass Unwrap Gets Underway
His Royal Highness, The Prince of Wales becomes Patron of Surfers Against Sewage as the Charity Celebrates its 30th Anniversary »