Surfers Against Sewage is delighted to have made the shortlist in the Charity Awards, one of the charity world’s most prestigious excellence recognition programmes. Surfers Against Sewage’s Autumn Beach Clean Series has made the final three in the Environment & Conservation category, scoring highly against the ten Hallmarks of Excellence, as decided by the 10-strong judging panel of voluntary sector experts across a variety of fields.

The ten category winners, plus the recipients of the Overall Award for Excellence and the Outstanding Achievement Award, will be announced at a dinner on 18 June at the Park Plaza Hotel, Westminster, London. The black-tie evening will be hosted by world cup winning rugby star Will Greenwood, who will be joined by representatives of the shortlisted charities, alongside a ‘who’s who’ of charity leaders and celebrities from the worlds of theatre, television, music and sport.

The Autumn Beach Clean Series: Cleaning up the UK’s beaches

Marine litter is a priority campaign for Surfers Against Sewage (SAS), the environmental charity that strives to protect the UK’s ocean, marine life and beaches.  SAS’s recent Marine Litter Report outlines the true scale of the marine litter crisis and suggests a roadmap of action to radically reduce marine litter by 2020. Studies have shown that over 640,000 tonnes of fishing gear, known as ‘ghost gear’, is left in oceans around the world each year, and contribute to building the five great garbage patches blighting these oceans. 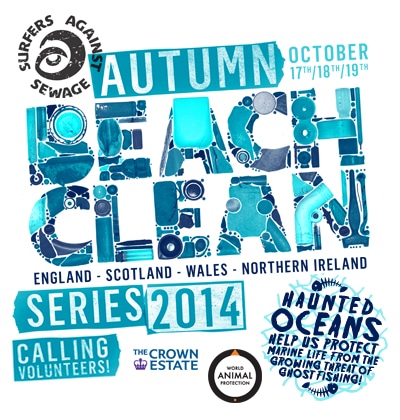 SAS has been running major beach-clean projects around UK shores since 2008, increasing the numbers of volunteers taking part and the volumes of litter collected, each year.  In 2014 the charity applied all its learning to its Cold Water Beach Clean series, renaming it the Autumn Beach Clean Series and encouraging supporters and the general public to stage their own beach clean weekends. It also expanded partnership with the Crown Estate and World Animal Protection to share expertise and networks and to enable better mapping of key results.

This approach yielded the best results to date.  Over 3,200 people collected ten tonnes of rubbish – 2,250 bin bags’ worth and including more than 500 bags of ghost gear – from 130 beaches in 2014.  This was the greatest number of events, the most volunteers, the most litter collected and the greatest media coverage since SAS began beach-cleaning projects seven years ago.

The charity hopes to build on this success through increased community education and by 2020 it aims to mobilise and educate 25,000 volunteers every year at 1,000 beach cleans nationwide.

Awards judge Sam Macdonald said he appreciated the fact that the charity was open and honest about things that had gone wrong and how they had addressed these, and that he thought it was an “impressive use of civic engagement”.

“We had an almost record number of entries this year – just four fewer than our all-time high in 2011 – and the standard was excellent, so Surfers Against Sewage should be very proud to have made the shortlist,” she said.

“For 16 years The Charity Awards have been identifying and celebrating the fantastic work that UK charities do, and the rigorous judging process ensures that only the very best-run charities make it through.

“We wish Surfers Against Sewage all the very best of luck on the night.”

“I am delighted that Surfers Against Sewage has been shortlisted by the Charity Awards. This is recognition of the huge efforts our community volunteers make nationwide to protect the beaches they love. The success of this project is thanks to the amazing communities and individuals taking part – so thanks to them!”

“I would like to congratulate all the charities shortlisted for this year’s awards, as well as all those who took the time to send in an application. CAF exists to support the amazing wealth of charitable endeavour across this country and around the world, and it is always humbling to see the great work being done by people in so many ways.

“These awards show charities at their very best, working to support people in communities around the country in myriad different ways at a time of continuing economic uncertainty. Celebrating that success is a massively important part of maintaining and building the culture of generosity in Britain of which we should be so proud.”

The distinguished panel of judges for 2015 are:

The Hallmarks of Excellence

About The Charity Awards

The Charity Awards 2015, now in its sixteenth year, is organised by Civil Society Media, publishers of Charity Finance, Fundraising and Governance magazines and www.civilsociety.co.uk.

The Charity Awards is sponsored by Charities Aid Foundation (CAF). CAF’s mission is to motivate society to give ever more effectively, transforming lives and communities around the world. They help people and businesses support the causes they care about, and provide financial and funding solutions designed specifically for the charitable sector. www.cafonline.org

The Charity Awards is also supported by The Times and The Sunday Times.

I am delighted that Surfers Against Sewage has been shortlisted by the Charity Awards. This is recognition of the huge efforts our community volunteers make nationwide to protect the beaches they love. The success of this project is thanks to the amazing communities and individuals taking part – so thanks to them!
Hugo Tagholm, chief executive of Surfers Against Sewage