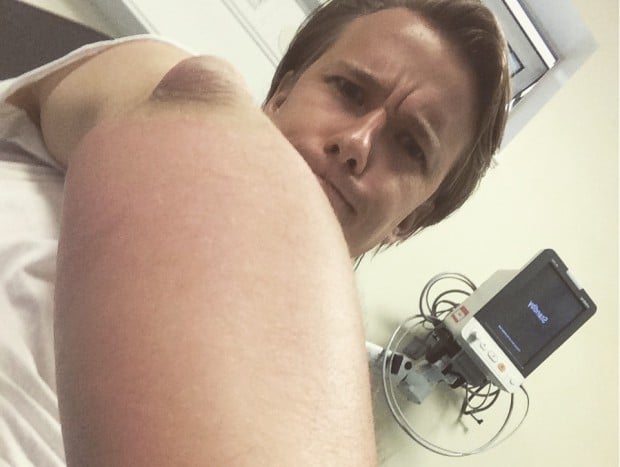 I write this from a hospital bed, typing on my phone with one hand while the other is pumped full of antibiotics via an IV drip, for a third consecutive night.

Last week, a decent swell hit the East Coast of Scotland, and, as is often the case in these rare summer circumstances, when 5:30pm arrived I set off from work in search of waves. I arrived at one of my ‘old faithful’ spots and it didn’t let me down. Perfect three-footers were bouncing off the rocks and forming a lovely right-hander that only properly comes together with the right wind and swell directions. 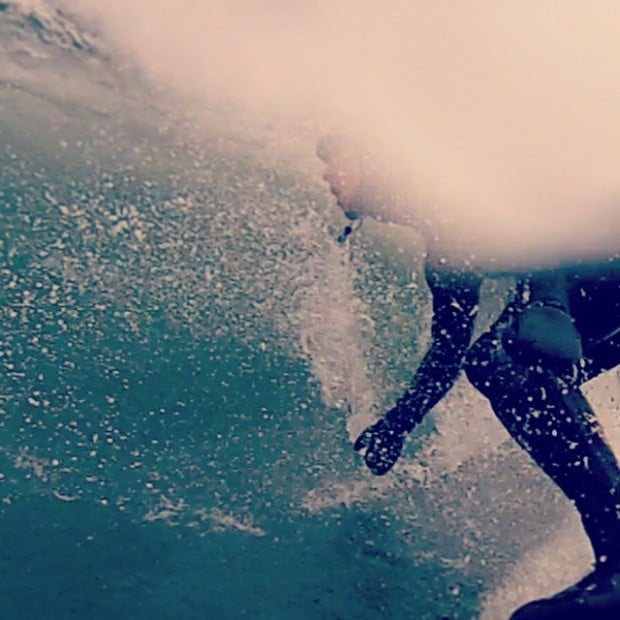 After surfing until dark (which is close to midnight in the Scottish summer), I set off home as a happy man with a handful of decent waves under his belt. It wasn’t until two days later that I realised that something was awry. A strange yellowish liquid had started oozing from my elbow, which was rather unsightly but I didn’t think too much of it. That night however, I woke up in agony as my arm was throbbing intensely. I turned on the bedside light and stared in horror at my forearm, which was so swollen that it resembled Pop Eye’s after he’d overdosed on spinach.

I took a couple of Nurofen and tried to get back to sleep. After getting some antibiotic tablets and a few kickass painkillers from my GP the next morning, throughout the day I watched the swelling increase down my forearm and when it reached my wrist, I went straight to hospital.

So, here I am, watching flucloxacillin slowly ooze into my veins, feeling like utter garbage. The doctor’s diagnosis? Cellulitis. I thought that this was what women got on their legs, but after a quick, rather disturbing Google image search, it appears that I may actually have got off quite lightly. It turns out that Cellulitis is a bacterial infection that if left untreated can be life threatening. 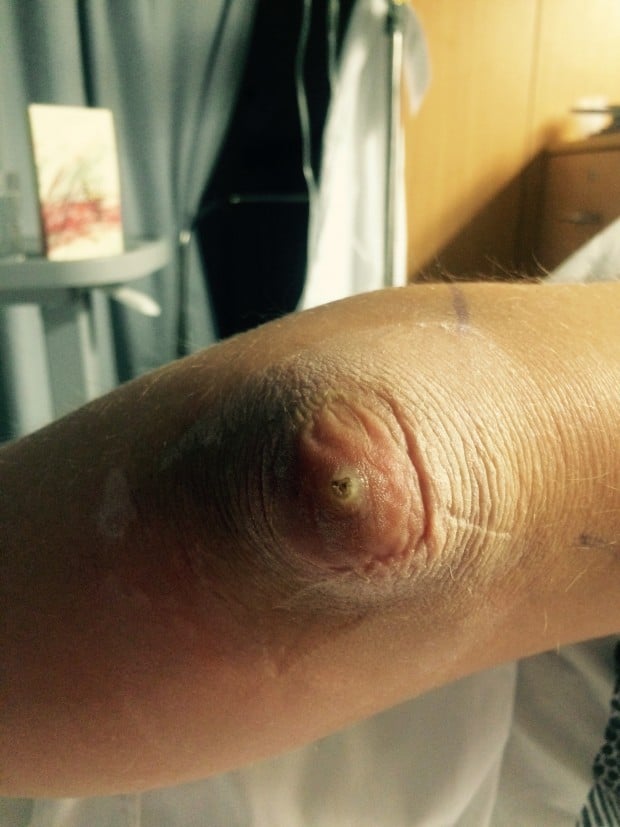 So, what has this got to do with surfing? Well, after explaining my recent activities to the doctors, they concluded that it is likely that a small cut on my elbow, suffered after hitting a rock or even just through repetitive rubbing from my wetsuit, got infected by the suspect water that I was surfing in. The NHS website says, “Some cases of cellulitis can develop if a wound or other break in the skin is exposed to water that is contaminated with bacteria.” Without giving too much information away about the location of my favourite spot, there’s a caravan park on the beach, and I’m hazarding a guess as to where some of the waste seeps in from. The water doesn’t taste great. It is a nice wave on its day though.

So, as I watch a variety of eclectic characters come and go from my ward, including a terrifying looking man who had been whacked with a crowbar, a poor guy with Alzheimer’s that thinks he is on an aeroplane and screams all night and an absolute hero called Bill that’s 80 and can’t believe that people surf in Scotland, I can’t help feeling that this situation could be avoided. One of my mates said, “Well that’s what you get for surfing around here,” but that’s not really the point. People should be able to enjoy the sea wherever they are in the world, without the risk of getting ill from their chosen activity.

I imagine that I won’t be surfing for a while now, but I’ll be back. I’ve always had my concerns with the quality of the water around here, but this has simply fuelled my fire. The beach cleans, events and awareness raised by Surfers Against Sewage is absolutely incredible, but still more can be done. The Scottish coastline is one of the most stunning in the world and our icy waves can be superb. We’re fairly safe from sharks here, but as surfers our main hazards come from our own kind: human beings pumping waste and raw sewage into our oceans. Sounds pretty strange when you read it out loud, doesn’t it?

John’s story highlights the urgent need for real time water quality information at beaches throughout Scotland. SAS are currently lobbying Scottish Government and Scottish Water to provide this information, but their current stance is unsupportive.  If John had been able to access the Safer Seas Service, he would have been able to make an informed choice about whether to surf his local beach that day and perhaps wouldn’t have ended up in hospital.

The Safer Seas Service app offers real-time water quality information that lets you know when raw human sewage or diffuse pollution is discharging at 330 beaches across England and Wales. Stay safe this summer and download it today.