200 Students Join Us For A Truly ‘Rubbish Day Out’

Together with our friends at Clean Cornwall and the Eden Project we asked Cornwall’s students; “What role can you play to help stop litter?” during two great weeks that saw us travel the length and breadth of the county.

On 21 March 2016, in a bid to encourage more young people to think about litter and its impact on the environment we joined forces with Clean Cornwall and the Eden Project to host a ‘Rubbish Day Out’ at Eden bringing to a close the Cornwall Be The Change Education Programme in style.

The event saw eight primary schools and eight secondary schools from across Cornwall pitching against each other to win a newly created ‘Be the Change’ schools award that included a £500 grant, a Fal River Enterprise Boat trip and a handcrafted glass trophy by Jo Downs.

Throughout March, we visited schools to deliver litter and waste themed workshops with the aim of getting students to think about how they can ‘Be the Change’ and help create litter free communities. You can download the Be The Change workshop materials here.

Students from each of the participating schools were asked to design their own ‘Anti-Litter Action Plans’ and then pitch them as part of a ‘Rubbish Day Out’ at Eden.

On arrival at the ‘Rubbish Day Out’ each school was matched with a member of the ‘Pitch Crew’ and introduced to the judging panel. These anti-litter experts included Doctors of science communication, big wave surfers, refuse collection supervisors, locally renowned beach protectors and marine initiative Fishing For Litter.

The activities kicked off with a fast and furious fact finding mission where students asked the anti-litter experts for their expertise to help fine tune their ‘lightning pitches’. The children then moved on to a ‘Trasher Hunt’ around the Biomes, and five children earned themselves free cinema tickets courtesy of WTW Cinemas in reward for their anti-litter exploring skills.

With just 3 minutes and 33 seconds to pitch their ‘Anti-Litter Action Plans’ the atmosphere during the pitch process was electric. The judges listened intently to the students’ ideas, which ranged from prototype interactive recycling bins, waste electrical and electronic equipment recycling, to exploding litter films and thought provoking songs. Emerging victorious from Eden’s very own ‘Dragons Den’, Grade-Ruan Primary School’s colour coded ‘Bin Backpacks’ and Penair Secondary School’s ‘Litter Olympics’ were announced as winners of the inaugural ‘Be The Change’ Schools Award.

Relaxed after a job well done

Tregadillet School on a ‘Trasher Hunt’ 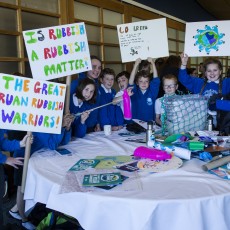 Grade-Ruan letting us know what they think :)

Amidst the excitement of the day, for the brave and curious students, there was the lure of the ‘Helmet of Truth’. Once wearing the ‘Helmet of Truth’ students were protected with anonymity. Then and only then were they asked if, after taking part in ‘Be The Change’, they should care about litter in the environment!

Exhausted, smiling and well and truly inspired the day ended with a commitment from the winning schools to deliver their ‘Anti Litter Action Plans’ in line with World Oceans Day on 8 June 2016.

Grade Ruan hearing that they had won!

Thanks also to the photographers, Irene Mendez Cruz, Viki Blackmore, Anthony Slocombe, Phil Wade and Daz for donating their time and incredible images.

Today we’ve seen the very best of Cornwall’s young people. I have heard them talk with passion about the impact of litter on our living world and with commitment about the habits they want to change to reduce the amount of waste we all create. Huge congratulations to all who took part in today’s Rubbish Day Out at Eden and in the wider ‘Be the Change’ schools programme. They give us great confidence that the future of Cornwall – our beautiful home – will be in good hands.
Gordon Seabright, Eden Project Managing Director, who awarded the two winning schools with their prizes.

We are delighted to support the ‘Be the Change’ school programme by offering pupils from the two winning schools a trip along the Fal River on an Enterprise Boat. This will be a great opportunity for them to explore this Area of Outstanding Natural Beauty and a stunning, unspoilt landscape. On board the children will get to see lots of fascinating wildlife on and around the river, which we hope will help bring to life ‘Oscar the Otter’ from ‘Be The Change’ and the importance of his messages about the impact of litter and waste on our environment.
Local business Fal River Cornwall added

Be The Change and a Rubbish Day Out is a combination of the vital work already being done by Clean Cornwall’s ‘Litter Heroes’, SAS’s Sea For Life schools programme and the Eden Projects Zero Waste team. It has been so encouraging to see the impact that a partnership like this can have on local schools and the really positive response from students about the role they can play in their local communities to help reduce litter.
Cllr Joyce Duffin, Be The Change judge and Cornwall Councillor for Housing and Environment said